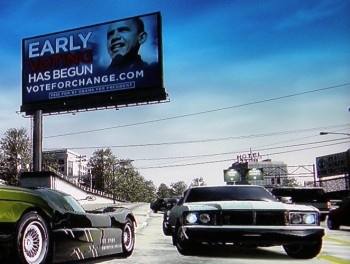 Democratic presidential candidate Barack Obama is breaking new ground as the first candidate ever to buy ad space in a videogame.

The Obama campaign has taken out ads in nine EA games for the Xbox 360 that will feature on virtual billboards and other in-game signage. "It reaches an audience that is typically very hard to reach - young males, roughly 18 to 34," said EA rep Holly Rockwood, who declined to say how much was paid for the advertisements. "That's very appealing to our advertisers."

Representatives for both Obama and Republican candidate John McCain were approached by the Microsoft-owned online advertising agency Massive, according to the Seattle Times. While McCain's people declined the offer, Obama's "highly targeted" ads first appeared on October 6 and will continue until November 3, with actual run times varying between states. The ads are only running in ten states where voting could swing either way - Colorado, Florida, Iowa, Indiana, Montana, North Carolina, New Mexico, Nevada, Ohio and Wisconsin - nine of which, Gamespot says, voted Republican in 2004.

The Obama ads are appearing in the following games:

Naturally, EA's Rockwood said the ads "do not reflect the political policies of EA or the opinions of its development teams," but the truth of the matter is that in many ways they do. A recent look at the political leanings of various industry figures found that 13 executives or developers, including EA CEO John Riccitiello, had donated to the Democratic campaign, while only three had coughed up cash for the Republicans. A poll of 100,000 Xbox Live found a similar, although somewhat less skewed, split between respondents, with Obama drawing 43 percent of the vote while McCain earned 31 percent.

It may be news, but it shouldn't be surprising. The videogame demographic is undeniably huge, and will only continue to grow. Neither campaign has gone out of its way to appeal to gamers - Obama claims the last videogame he played was Pong, while McCain aide Michael Goldfarb famously dismissed "the pro-Obama Dungeons & Dragons crowd... [living in] the comfort of mom's basement" - but Obama at least seems to recognize the potential of non-traditional means of advertising. Whether he's come to view gamers as an important and untapped voting block, or it's just a politically expedient way to burn some excess cash, is another question entirely, but you can bet that by the time the next election rolls around, this kind of virtual campaigning will be commonplace.