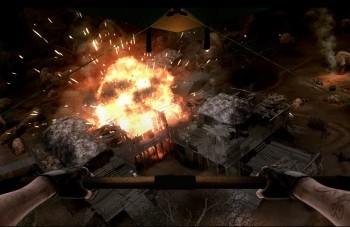 It's not an EA game, but Ubisoft has confirmed that Far Cry 2 is going to employ some very EA-like anti-piracy measures.

A post on the official Far Cry 2 forum at Ubisoft (via Blue's) by forum manager "bukowski113" says the upcoming FPS will employ SecuROM in a system almost identical to recent EA releases, limiting users to five activations each on three separate PCs. Unlike previous games incorporating SecuROM, however, uninstalling Far Cry 2 will automatically revoke an activation, meaning that as long as owners properly uninstall the game when they're finished with it, they'll be able to install it an unlimited number of times on three systems.

The message also says the revoke system will allow gamers to upgrade their systems as many times as they want, presumably by uninstalling the game before performing an upgrade, and also promises that "additional activations can be provided" if necessary. "Ubisoft is committed to the long term support of our games," the forum manager wrote. "You'll always be able to play Far Cry 2."

Predictably, discussion about the use of SecuROM is running hot and heavy, although the presence of automatic revokes and vocal commitment to the long-term viability of the game seems to have tempered the vitriol somewhat. But it's still something of an odd choice: Anti-DRM sentiments are running at an all-time high, the recent Spore experience has proven that it does virtually nothing to stop piracy and the Far Cry franchise isn't nearly enough of a mainstream heavyweight that it can shrug off a concentrated negative reaction among core gamers.