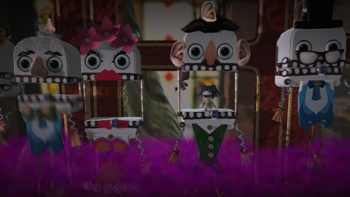 LittleBigPlanet has been caught by a last-minute delay resulting from controversy over the use of passages from the Quran in the game's music.

The game was originally set for release on October 24, but some retailers have now revised that date, saying the game won't hit shelves until November 14. The last-minute hold-up appears to have caught everyone by surprise, given that the game's beta ended on October 12 and by all reports it was ready to go, but GamesIndustry is reporting the delay may not actually be that long.

VG247 has confirmed that the game is already in retail stores in the U.K. and other European countries, and has dug up the source of the trouble: A post on the European PlayStation community forums claiming that an audio track that plays in the first level of the third world ("Swinging Safari") contains Arabic words taken from the Quran, the foremost holy book of Islam, which the writer describes as "deeply offending."

"I asked many of my friends online and offline and they heard the exact same thing that I heard easily when I played that part of the track. Certain Arabic hardcore gaming forums are already discussing this, so we decided to take action by emailing you before this spreads to mainstream attention," the message says.

"We Muslims consider the mixing of music and words from our Holy Quran deeply offending. We hope you would remove that track from the game immediately via an online patch, and make sure that all future shipments of the game disk do not contain it," it continues. "We hope you act immediately to avoid any confusion and unnecessary controversy, and we thank you for making such an amazing game."

A Sony Computer Entertainment Europe representative has confirmed with The Escapist that the use of the Quran passages is in fact the reason for the delay. "During the review process prior to the release of LittleBigPlanet, it has been brought to our attention that one of the background music tracks licensed from a record label for use in the game contains two expressions that can be found in the Qur'an," the company said in a statement. "We have taken immediate action to rectify this and we sincerely apologize for any offense that this may have caused. We will confirm the new launch date shortly."