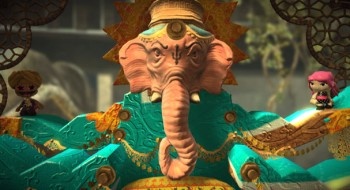 The president of the American Islamic Forum for Democracy has criticized Sony for recalling LittleBigPlanet due to the presence of a song that the company feared would offend Muslims.

"Muslims cannot benefit from freedom of expression and religion and then turn around and ask that anytime their sensibilities are offended that the freedom of others be restricted," M. Zuhdi Jasser, M.D., told Edge yesterday. "The free market allows for expression of disfavor by simply not purchasing a game that may be offensive."

Jasser added that contrary to the beliefs of many people, including some Muslims, Mohammed "defended the rights of his enemies to critique him in any way even if it was offensive to his own Islamic sensibilities or respect for Koranic scripture."

Sony ordered the recall following a forum post from a "devout Muslim" who claimed the presence of the song Tapha Niang, which had been properly licensed for use, was "deeply offensive" because it contained two lines taken from the Quran. A release day patch to remove the music was quickly devised by developer Media Molecule, but Sony elected to go one step further and recall the game world-wide to ensure nobody's feelings were hurt. But Jasser pointed out that the creator of the music, Toumani Diabate of Mali, was himself a "devout Muslim," which demonstrated that the issue is not about offending Muslims at all but instead about a desire to control speech and expression.

"To demand that [the game] be withdrawn is predicated on a society which gives theocrats who wish to control speech far more value than the central principle of freedom of expression upon which the very practice and freedom of religion is based," he said. "The fact that the music writer is a devout Muslim should highlight that at the core of this issue is not about offending 'all Muslims,' but only about freedom of expression and the free market."

While he himself does not endorse the use of the Quran in non-educational games, he affirmed that freedom of speech must come first. "AIFD stands against any form of censorship in the marketplace of ideas whether imposed by government or by corporations intimidated by the response of militants or those with an inappropriately sensitive level of political correctness," he said.

Sony's move to recall and delay the release of LittleBigPlanet in order to remove the potentially offending passages sparked widespread incredulity among gamers that the company would undertake such a massive endeavor over such a minor complaint; a few also pointed out that it took Sony over a week to even apologize to the Church of England when it complained about the company's unlicensed use of Manchester Cathedral in Resistance: Fall of Man.