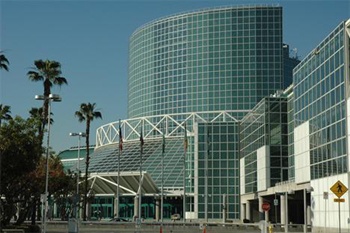 While rumors are circulating E3 2009 may usher in a return to some of the expo's past glitz and glory, the ESA remains tight-lipped.

Some of you may recall Monday's teaser on G4's major 8 p.m. EST announcement regarding next year's E3 Expo. What was all the fuss about? The return of Booth Babes? Pyrotechnics and spandex? Well, not exactly. It sounds like next year's expo will surely be somewhat bigger and presumably better; exactly how much so remains to be seen. Attendees lamented meager numbers and a general lack of awesomeness from this year's show, and long-time participants have been grumbling since the event was substantially scaled back several years ago. Will next year blow everyone out of the water? Many questions remain, but here's some food for thought.

During Monday evening's X-Play, G4's Blair Herter broke the "exclusive" news E3 2009 will return to the Los Angeles Convention Center for a bigger show with an earlier date running from June 2 to June 4. "More importantly, expected attendance to explode into the tens of thousands," he said. "Next year, E3 will not have the rigorous vetting process that was instituted in 2006. This time around a broader range of guests will be invited."

Herter suggests it won't be a free-for-all with open admission to the public, but more people will have an opportunity to attend. No solid details about entry criteria have been released. In fact, no official details have been released. Period. ESA won't be talking about its plans for next year's E3 2009 until it's good and ready.

"We aren't commenting on the rumors circulating right now, but rather will make an announcement about the 2009 E3 Expo at an appropriate time," said ESA spokesperson Dan Hewitt yesterday in an e-mail response to a request for comment.