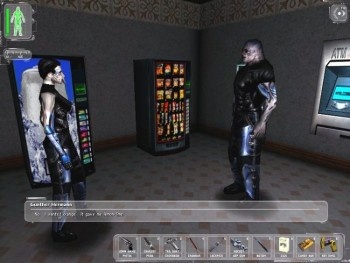 Deus Ex 3 lead designer Jean-Francois Dugas says "console-isation" isn't about dumbing things down, and that he intends to retain the series' complexity across all platforms on which it's released.

In an interview with Edge, Dugas said the team at developer Eidos Montreal won't "dumb down" the franchise in order to accommodate console platforms, although he admitted that at this stage, "We don't know exactly which platforms we're going to be out on."

"The PC, we'll be there for sure," he continued. "But for us, console-isation isn't about dumbing down features. If we're to go console we will want to keep the complexity alive. We want the menu interface and controller to feel simple without risking any of their potential."

Of course, a great many Deus Ex fans would hasten to point out that Deus Ex: Invisible War was already significantly dumbed down when compared to the original, but it's not clear which iteration of the series Dugas is speaking of. Something else he said, however, is quite clear, and will no doubt send a shudder down the spines of gamers looking forward to the second sequel.

"There weren't enough exciting, memorable moments. [The original Deus Ex] was aimed more towards a simulation rather than a game experience," he said, adding that it was "kind of slow." The original Deus Ex, of course, is one of the most universally-acclaimed videogames of all time, with a Metacritic score of 90, a MobyGames ranking of 91 and over a dozen "Game of the Year" awards to its credit.

I will leave you to discuss this amongst yourselves.