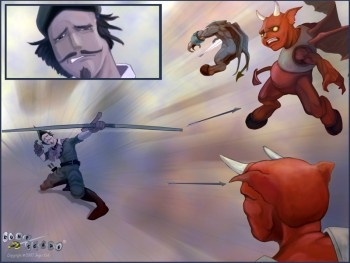 Two Dutch teenagers have been convicted of theft in a case involving virtual items taken from a computer game.

The pair, aged 14 and 15, were sentenced to a total of 360 hours of community service for "coercing" a 13-year-old boy into transferring a "virtual amulet and a virtual mask" from his account to theirs in the game Runescape, according to a report by Yahoo News. In its ruling, the Leeuwarden District Court said, "These virtual goods are goods (under Dutch law), so this is theft."

Eurogamer says this is the first time such a ruling has been made in Holland, and that cases involving virtual items are rare and often not prosecuted. In February, police in the city of Minnesota in the U.S. refused to look into the case of a player who lost all his items and in-game currency after his Final Fantasy XI account was broken into. Despite having a real-world value of about $3800, the police said "game points were 'devoid of monetary value'," and thus no actual theft had taken place.

There is one potentially mitigating factor in the Dutch case that may have helped the courts reach their decision, however. The virtual theft was preceded by a real-life ass-kicking: The two thieves beat up their victim and threatened him with a knife.

Crush Your Enemies, Even When They're Not Online, in War of Legends Greg Tito 29 Comments
Comments on