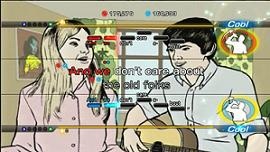 The Xbox 360's upcoming karaoke franchise is launching with forty famous hits, including "Hungry Like the Wolf" and more recently Rihanna's "Umbrella".

Leaked online around this year's E3 and developed by iNis (makers of the funky DS rhythm title Elite Beat Agents), Lips will release with two motion-sensitive wireless microphones for $69.99.

A Freestyle mode allows players to plug in any DRM-free MP3 into the Xbox 360 and sing to song without the lyrics displayed onscreen.

Standard "Party Modes" such as Vocal Fighters (singer-versus-singer) and Time Bomb (cooperative play to pass a song) were mostly expected. However, the fresh "Kiss" mode forces both singers to use the microphones for certain stage-stealing motions until the two stars are singing so close they must kiss each other.