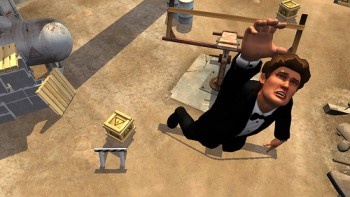 There's no good, or rational, or even coherent way to put this, so I'm just going to lay it out for you: David Hasselhoff is coming to Pain.

The Hoff made the announcement himself on the PlayStation Blog, confirming that he will be featured in the game's new Movie Studio level and will also be available as a downloadable character on November 6, a day Sony says will be known evermore as "Hoff Day." But that's not all! The cherry on the beefcake is Hasselhoff's cover of the Culture Club hit "Do You Really Want To Hurt Me?" which he recorded to mark his arrival in the quirky PSN game.

"Hello everyone, it's your friendly neighborhood David Hasselhoff here. I know you're probably wondering 'What in the KITT am I doing on the PS Blog?' right? Well... settle down... settle down! I'm here to let you know straight from the Hoff's mouth - I'm coming to Pain! And it hurts so good!" the Knight Rider and Baywatch superstar wrote in the official announcement.

"What am I doing in Pain you ask? It's the Movie Studio! What's a movie studio without The Hoff? You can now put The Hoff into a launcher and fling me into harm's way - exploding crates, cars, people - everything is fair game. And best of all, you'll never even put a scratch on this mug of mine!" he continued. "When I was first approached about Pain, I really didn't know what to think. I mean, it's great to think that someone would want to put me in a game, but THIS game is all about flinging people into walls, smashing them into cars, and spanking monkeys. While I wholeheartedly approve of the monkey spanking, I wasn't too sure about the rest of the game. When I finally got my hands on Pain though, everything changed, and I 'got it.' If anybody can understand silly fun, it's me."

In Pain, a downloadable title available from the PlayStation Store, gamers use a catapult to fling their avatars around various locales, attempting to earn points by doing as much damage to themselves and their surroundings as possible. The Havok-powered game includes a range of characters and game modes and features both single and multiplayer action.

"I am a man of many emotions so when you throw me around the Movie Studio, I need to express myself. What better way than in song! So to commemorate my invasion onto the PS3, I made a cover song of Culture Club's "Do You Really Want to Hurt Me" exclusively for Pain," Hasselhoff said, describing the track as "like nothing I've done before."

"So, after a lot of hard work by a bunch of talented people, Hoff Day is coming on Nov. 6! I've got the keys to the Movie Studio... who wants in? After all, do you REALLY want to hurt me?" he continued. "Wait... don't answer that. Just go download The Hoff and play PAIN!"

A video of Hasselhoff's explosive introduction to Pain, including a preview of his Culture Club cover - which I have to admit is like nothing I've ever heard before - can be seen at People Magazine.