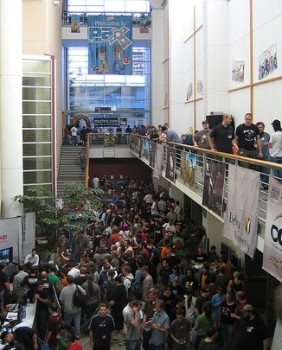 E3 is making noise about a return to its glory days of old, but the guys at Penny Arcade aren't worried about the impact that could have on the Penny Arcade Expo.

Since launching in 2004, attendance at PAX has ballooned from 3300 to over 58,000 in 2008, and plans to launch a second show on the east coast by 2010 were announced earlier this year. Unlike E3, which is an industry event, the Penny Arcade Expo is entirely for gamers, including PC, console and even tabletop fans. Ironically, its direct appeal to gamers, coupled with the extreme downsizing of E3, has led many game companies to consider it a more relevant and worthwhile show.

The ESA's decision to return to a "big noise" E3 is at least in part a response to the success of PAX, but Penny Arcade artist Mike "Gabe" Krahulik isn't worried about the impact it could have on their show. "I ... can't imagine it stealing any of our thunder. We have a ridiculous amount of thunder and honestly if they were to steal some of it we probably wouldn't even notice," he told Edge Online. "Just yesterday we accidentally left some of our thunder in our pants and then they went into the washing machine and the thunder got ruined. It wasn't a big deal to us, though, because we have plenty more thunder."

More seriously, he continued, "I don't see it having any effect on PAX, no. E3 has always been and looks like it will continue to be about the industry. PAX is about the community around games as much as it's about the games themselves."

Krahulik's position seems to be shared by ESA President Michael Gallagher, who said in earlier comments that while the show is expanding its criteria of who will be admitted, it will nonetheless remain an industry event. "E3 has never been a consumer show," he said. "We're not competing with PAX or Comic-Con."

Which may be one reason why Krahulik said the Penny Arcade crew doesn't expect to make E3 in 2009. "We've been to E3 and I feel like we know what it's about. I think it's worth seeing once," he said. "I mean, it really is a spectacle, but ask any gamer who has been and they'll tell you that E3 is a terrible place to play games."