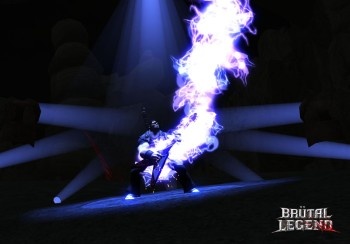 It looks like Activision is trying to make life rough for the guys at Double Fine Productions, who claim the company is actively blocking their quest to find a new publisher for Tim Schafer's latest adventure game oddity Brütal Legend.

Brütal Legend was one of many games slated to be published by Sierra that fell victim to the merger between Activision and Blizzard. Activision announced in July that it was only interested in five properties owned by Sierra/Vivendi, leaving games like 50 Cent: Blood on the Sand, Chronicles of Riddick: Assault on Dark Athena and Leisure Suit Larry: Box Office Bust without a home. Most of those games have since found new publishers, but Brütal Legend is still without a deal.

According to Variety's Cut Scene blog, a big reason for that is Activision Blizzard itself. Sources at Double Fine say other publishers are interested in the game, but that Activision has been "blocking the process" and is "an impediment" to potential new deals. Naturally, Activision declined to comment on the matter, but even though details are scant it's an accusation not made lightly: Activision is a big player, and even though it may not be interested in Brütal Legend, poisoning the well without a pretty good reason isn't a smart way to go about building future relationships.

The obvious question is why Activision would do something like this in the first place. It's not difficult to understand why it'd pass on Brütal Legend; while Schafer has received widespread critical acclaim for his work, with games like Grim Fandango and Psychonauts to his credit, he has yet to come up with a major commercial hit. On the other hand, grass-roots interest in Schafer's games has been simmering, driven by the growing recognition of his creative talents, and perhaps Activision hasn't completely given up on the idea that the game could be a sleeper hit. Whatever the case, we'll no doubt be hearing more in the future.