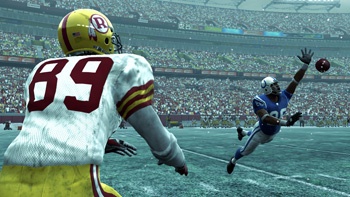 Despite predictions that the videogame industry is "recession proof," things are starting to get ugly at EA, which just announced the layoff of six percent of its workforce in response to a $310 million dollar loss in the company's second fiscal quarter.

Net revenue for the quarter was up significantly, to $894 million for the three months ending on September 30, but rising costs, including "certain abandoned acquisition-related costs," resulted in a net loss of $310 million, a big jump over the $195 million loss taken in the same period in 2007. EA shares also took a tumble, losing 14 percent of their value in after-hours trading, dropping from $27.73 to $23.75 per share.

As a result, the company will implement a cost reduction plan, which includes the layoff of roughly six percent of its workforce - between 500 and 600 employees - and will expand its future hiring in "low-cost locations," which is to say, outside the U.S. Electronic Arts estimates the cuts will save the company over $50 million per year.

Revenues for the quarter were driven primarily by the launch of Madden NFL 09, Spore and Warhammer Online. Madden did well, putting out over 4.5 million copies, but as VentureBeat points out, Spore's sales of two million units is "respectable," but nowhere near the massive hit EA was pulling for, and whether it will have the long-term viability of Will Wright's previous franchise, The Sims, is debatable. Electronic Arts CEO John Riccitiello laid some of the blame on a retail "slow down" in October, as well as the postponement of the newest Harry Potter movie and its accompanying videogame, but said that despite being "cautious in the short term," he was "very bullish on the game sector overall and on EA in particular" in the longer term.

Riccitiello's optimism wasn't shared by analyst Michael Pachter, however, who issued an investment note following EA's earnings call (via GamePolitics) which continued to recommend the company as a "strong buy" but was nonetheless critical of management. "With the stock hovering near a seven-year low, management continued its recent history of disappointment, and spent an inordinate amount of time sowing seeds of fear about the potential for a tepid holiday sales season," Pachter said. "EA's share price in after hours trading reflects that many investors have abandoned hope... Management has demonstrated an uncanny ability to snatch defeat from the jaws of victory in the eyes of investors, and we think that these old habits will take a long time to die."

In light of all this, it's natural to wonder how the other side of that "certain abandoned acquisition-related cost" is doing: In its last reported fiscal quarter, ended July 31, Take-Two Interactive was up considerably over its previous year, showing net income of almost $52 million.