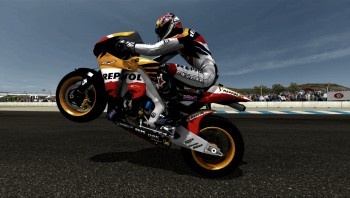 Capcom has announced that the PC version of MotoGP 08 has a "technical issue" that crops up when the game is installed to a custom location.

"Capcom regrets to inform consumers who have recently purchased the PC version of MotoGP 08 that we have just identified a technical issue with the PC version of the game," the company said in a press release. "This issue only happens with MotoGP 08 PC when installing the game to a custom location on a hard drive; This issue does not affect the default installation, as it only occurs when the destination location has been changed."

The exact nature of the problem is something of a mystery, but whatever it is, it's easily avoided by simply opting for the game's default installation location, rather than selecting a custom directory.

"In the next few days, Capcom will be releasing a patch for MotoGP 08 that will correct this issue," the company said. "We regret any inconvenience that this may have caused our MotoGP community."

MotoGP 08, the official game of the 2008 Gran Prix Motorcycle Racing season, shipped on October 28 for the Xbox 360, PlayStation 2 and 3, and PC, with versions for the Wii and PSP coming in the future. More information about the game is available from Capcom.