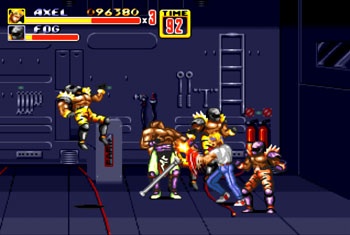 Over 40 classic Genesis and Master System titles are being featured in the biggest collection of Sega titles ever assembled.

How many times has the Sonic the Hedgehog series been bundled together? Off the top of my head, I count six. But what about Sega's landmark RPG series, Phantasy Star? Did that obscure Sega Saturn release ever come bundled with the likes of Kid Chameleon or Comix Zone? Much to the chagrin of those who have purchased their collections in the past, Sega is firing its proverbial load into what amounts to the biggest collection of Sega classics ever assembled, Sonic's Ultimate Genesis Collection for the Xbox 360 and PlayStation 3.

The collection itself contains over 40 titles (which can be viewed below, sans unlockable games) from the very best of Sega's Genesis and Master System era. From the original Phantasy Star series to obscure favorites like Beyond Oasis and Decap Attack, gamers will find it tough to choose a favorite amongst the bunch.

While the list of included titles is extremely impressive, Sega's previous track record in bringing its vintage games into the HD-era calls for cautious optimism. Having already released Sonic the Hedgehog, Streets of Rage 2 and Golden Axeon Microsoft's Xbox Live Arcade platform, we've seen what happens when these classic titles are processed at higher resolutions without proper care, with the visuals appearing as though someone slathered Vaseline all over your television.

It's also disappointing to see that this collection, being offered as a full retail release, may be lacking features from their online-enabled XBLA counterparts, with Sega claiming that you may "Play these classics together with a friend from the same console at home." As a consolation prize, Sega does promise unlockable content in the form of developer interviews, achievements (as well as trophies for PS3 users) and extra games. If I may be so bold as to make a prediction to that last point, I have a strong feeling that we'll be counting Sonic 2 & Knuckles as well as Sonic 3 & Knuckles as unlockable titles. Call it a hunch.

Sonic's Ultimate Genesis Collection is currently scheduled for Winter 2009 and is set for a retail price of $29.95. The gargantuan list of included titles are as follows.