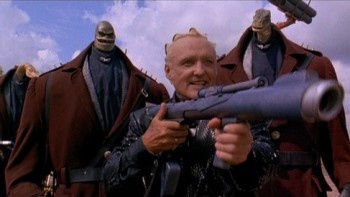 Ever wonder how Dennis Hopper of all people ended up playing King Koopa in the Super Mario Bros. movie? Hey, he needed the money.

People who complain about videogame movies today should treat themselves to the 1993 Super Mario Bros. movie, a widely-reviled film that's earned itself a six percent score on Rotten Tomatoes. Yet despite the obviously thin source material, the movie managed to attracted some notable talent: Bob Hoskins, John Leguizamo, Lance Henriksen, Dan Castellaneta and of course, Hopper himself, not the kind of guy you'd normally expect to show up in what is ostensibly a kid's movie. The experience has obviously stuck with the actor, who was asked recently by Conan O'Brien if he regretted any of the great number of movies he's made over his career.

"I made a picture called Super Mario Bros., and my six-year-old son at the time - he's now 18 - he said, 'Dad I think you're probably a pretty good actor, but why did you play that terrible guy King Koopa in Super Mario Bros.?'" Hopper replied. "And I said, 'Well Henry, I did that so you could have shoes,' and he said, 'Dad, I don't need shoes that badly.'"

I haven't seen the movie myself, but I imagine it takes a special kind of bad to make a six-year-old child trash his own father's acting ability. But the experience obviously didn't sour him on videogames completely: Since the Super Mario Bros. movie, Hopper has lent his voice to Hell: A Cyberpunk Thriller, Black Dahlia and Grand Theft Auto: Vice City.