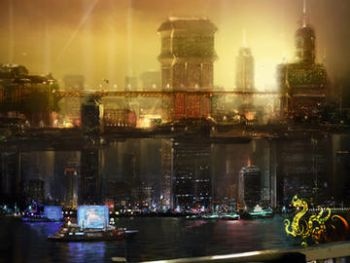 Early screenshots of the upcoming Deus Ex 3 have been posted online, along with a look at the background of the game and how it will fit in with the rest of the franchise.

The new game is actually a prequel, set 25 years before the events detailed in the original Deus Ex. That decision was made in part because of the very firm game endings in Deus Ex: Invisible War, and also out of a desire to make the game world more familiar and accessible to players. "Invisible War was very sci-fi - maybe too much," Lead Designer Jean-Francois Dugas told Edge Online. "We wanted to explore the era when mechanically augmented people first started to emerge."

The fact that the events following Deus Ex 3 have already been chronicled isn't going to stop the new game from continuing the series' tradition of having multiple endings depending on the player's choices, Dugas said, claiming that in-game events will "fit" with the rest of the series. "Invisible War started with a fusion of the previous game's multiple endings. I think for us it will be a bit similar," he said. "We'll have different endings - but they will all make sense to players of Deus Ex."

He was noncommittal on just how the importance of player choices will work out over the course of the game, however. "Going with a branching storyline would be very complicated and expensive and the game would ship ten years from now," he said. "However, something that we wanted to fix from Invisible War was the way your final choices weren't affected by any of the previous decisions in the game. We have some ideas that we're still exploring - but we're looking at integrating earlier choices to impact the way things play out."

It sounds promising, but many fans, myself included, are still sweating over Dugas' opinion that the original game was "kind of slow" and lacked "exciting, memorable moments." Deus Ex 3 is currently in development at Eidos Montreal for the PC, Xbox 360 and PlayStation 3, and is slated for release in 2010.