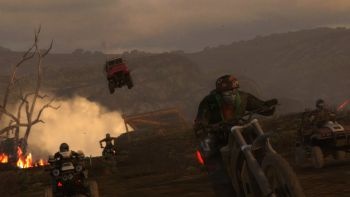 MotorStorm: Pacific Rift Lead Designer Nigel Kershaw is tired of hearing complaints about pre-rendered videos, and he's not shy about using naughty words to let people know about it.

MotorStorm's debut trailer at the 2005 E3 was the target of criticism after Sony failed to make clear that the video was pre-rendered rather than taken from the actual game, leading some to suggest that the company was behaving deceptively. But in an interview on the 1Up Show, Kershaw claimed that renders are a normal part of the design process, and shot back at people who complain that the final result doesn't look the same as those early videos.

"We always do a render. Before you do a game, you do a test render that says, 'This is the game we want to make, now let's go make it.' It's just like writing a game design document. The end result might not look like the render that you did. Who gives a shit?" he said. "If you're 50, 60, 70, 80% to that line, then you've succeeded."

"But it's this thing that haunts you, that you didn't match your target render.... Everybody makes such a big f*cking deal of it," he continued, expressing frustration over the fact that he still hears about that early video. "Who gives a shit? That's how we make games. If people have got a problem with that, tough."