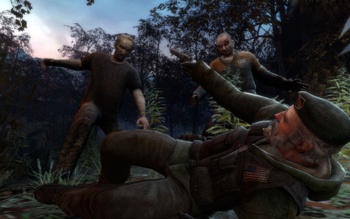 Can't wait until next November 18th to blow some heads off the undead? Get a sneak peek right now!

The wait is almost over. Valve's terrifying zombie-infested first-person shooter is marvelously close to fruition. While those who pre-ordered Left 4 Dead have already had plentiful opportunities to fight for survival in the first two levels of the oncoming zombie apocalypse, anyone with an Xbox 360 or a PC can now get a taste of the action. In case you missed it yesterday, the demo is now available for the general public to download via Xbox Live and Steam.

A free demo is a free demo, but the pot is all that much sweeter - and the brains much tastier - when zombies are involved. Still need some persuasion? Take a quick gander at game's heart pounding opening cinematic. If that doesn't get your blood pumping and your itchy trigger fingers twitching for some zombie slaying, first-person shooting survival horror nothing will.

The Left 4 Dead demo will be available until Nov. 18, when the game launches on Steam and at retail outlets for the PC and Xbox 360. Get in on the zombie infestation a bit early, while you still can.