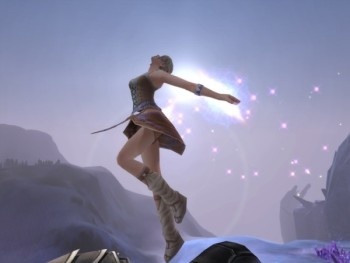 A Korean MMOG company may set a customer service precedent early next year by offering refunds to players who purchased in-game items for an MMOG that's being shut down.

ZerA, launched by Korean developer Nexon in February 2006, never really caught on with gamers, topping out at around 40,000 concurrent users, according to an article in the Korea Times (via PlayNoEvil). The game's popularity has since declined to the point where plans to release it in Japan were shelved, and it is now set to be shut down in January 2009. ZerA's demise will no doubt reverberate across the Korean gaming scene as developers and publishers try to determine what went wrong and gear up for a better try next time, but we don't really care about that.

What we do care about, though, is Nexon's plan for the game and its users. "The company will yank ZerA, a role-playing game that took three years and 10 billion won (about $7.5 million) to develop, at the end of January and is preparing to repay users who own paid items," the report says.

This is worth repeating: "Preparing to repay users who own paid items." It's pretty amazing stuff, and of course subject to change, but at this point it looks like anyone who laid down real money to buy items in ZerA, on the assumption that the game would be around for awhile, are going to get that money back. Details and limitations on the refund offer haven't been revealed, and to be honest I wouldn't be too upset if Nexon declined to buy back items that were purchased in the early days of the game, but the point is that by all appearances the company is going to take care of its customers.

Whether or not this will raise the bar for other MMOG publishers will depend largely on how Nexon actually handles the buy-back program; the devil is in the details, as the saying goes. And a refund policy wouldn't do much good for games like Hellgate: London or Fury, which are so dismal that they end up destroying the companies that create them. But it's an intriguing idea, and if Nexon follows through, one that could have a very real impact on microtransaction-based MMOGs in the future.