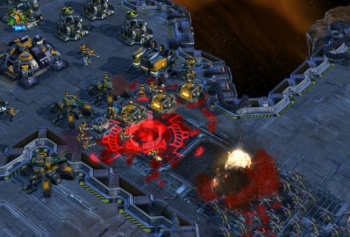 Splitting one decidedly sexy game into three installments to be released over several years may seem a bit excessive, but Blizzard Entertainment doesn't seem to think so.

At BlizzCon last month, Blizzard's announcement of the decision to release the hotly anticipated StarCraft II in three separate installments didn't sit very well with some series fans who criticized the move as a money-making scheme. This week, Blizzard Entertainment's COO Paul Sams defended the decision.

Speaking to Video Gamer, Sams said the goal was not about making more money off the game and claimed the move to an expansion trilogy format is rooted in a desire to give players a better gaming experience. However, the over-emphatic tone of Sams' comments on the matter possesses a distinct bouquet.

"The fact of the matter is it's absolutely, positively untrue about us trying to stretch it out and milk it. People think that it was a monetary driven decision. I can absolutely, positively tell you, with 100 percent certainty, that that was not part of the conversation," he said. "I guarantee it. I give my word. There was never, ever a conversation where we said, 'let's do this because we're going to make more money'. I guarantee it. As a matter of fact the sole reason we did it was because we thought it was going to be a better experience. Anybody that says otherwise is not correct. It is absolutely not what we did it for."

Geez Sams, I think we need a little more reassurance.