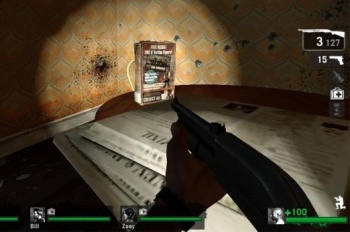 Astute players of the Left 4 Dead demo have uncovered an intriguing Team Fortress 2 Easter egg included in the game that hints at several awesome possibilities coming down the pike. Is Valve's sneakiness a practical joke or something more?

Located within the first apartment in the Left 4 Dead demo's initial campaign, a box of "Chocobites" cereal offers some potentially revealing information. Like all wholesome, sugary brands of breakfast cereal, the box purports to include a prize. In this case, it's an 8-inch toy action figure bearing the likeness of one of the nine character classes in Team Fortress 2. Curiously, the box suggests we "collect all 10" - a difficult task when there's currently only nine classes in the game.

Regular TF2 updates have slowed down, while some members of the development team lent a hand to get Left 4 Dead out the door. New character upgrades are coming in 2009, and the possibility of entirely new classes to follow is not a far stretch of the imagination. Could this Easter egg be a teaser for a yet-to-be announced 10th class? Quite possibly. Alternately, it could signify plans for TF2 action figures to launch in the future. Either case is plausible. We'll just have to wait for Valve to make its next official move.