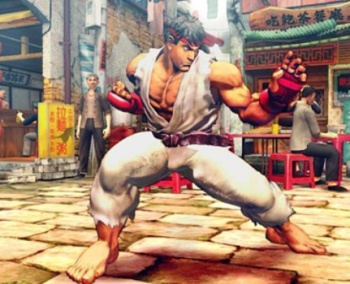 It's a truly lamentable shame, but the fight must go on.

What a travesty; a game all but tailored to be the perfect arcade fighting experience will be skipping arcades in the U.S. altogether. Capcom has confirmed Street Fighter IV will be the first game in the long-running brawler series to not be released in American arcades.

"At this point, it does not look like Street Fighter IV arcade machines will officially hit the U.S. arcade market," Capcom's Chris Kramer told Edge Friday. "There's not really an arcade business in the U.S. anymore. It's sort of like an 'amusement' business that sometimes has arcade games in it."

Enjoying the vitriolic, curse-spewing, button mashing bliss, and competitive gameplay induced by the series with friends in your living room is certainly one way to play the game, but there's something timeless and appealing about schooling complete strangers with a crowd gathered around the arcade cabinet. Street Fighter IV screams for a place in your local arcade. However, the extreme decline of arcades in the U.S. has made that unfeasible. To experience the game in the way it was truly intended, you'll have to hunt down one of the rare imported arcade cabinets or travel to Japan where the arcade industry continues to mysteriously flourish.

Fortunately, it's not a total loss. An arcade joystick peripheral is in the works to allow players to recreate the experience at home. Kramer touted the Mad Catz controllers as being "awesome." Street Fighter will launch on the Xbox 360 and PS3 on Feb. 17, 2009. A PC version is in the works, but an official date has yet to emerge.