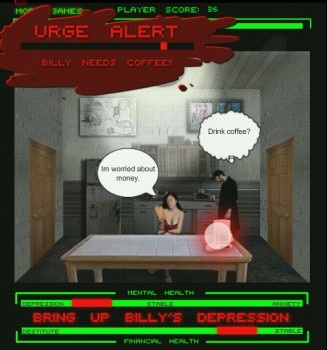 A new online game called Billy Suicide has critics riled up, with one suicide prevention group noting that killing yourself "should always be taken seriously."

In the game, players guide the eponymous Billy through his daily routine, moving between various activities while trying to keep his mental state in balance. Billy must earn money, entertain himself with television or music, satisfy various "urges" for things like coffee and booze, and participate in numerous other mundane tasks, each of which impacts his unusually mercurial mood. Let Billy slide too far into either depression or anxiety, and he'll pull a revolver from the folds of his disheveled housecoat and blow his brains out.

Unsurprisingly, the game has attracted criticism from groups like the Samaritans, a U.K.- based support group for people considering suicide. "Suicide is not a light-hearted subject and it should always be taken seriously," a representative of the group told the Telegraph. "Certain types of suicide portrayal can act as a catalyst to influence the behavior of people who are already vulnerable, particularly young people, and result in an overall increase in suicide and/ or an increase in uses of particular methods."

Paul Kelly of PAPYRUS (Prevention of Young Suicide) concurred. "This game is completely irresponsible and the people who made the game should realize the damage that it can incur in the terms of somebody taking their own life," he said. "We would urge them to think twice about what they are doing because we have seen clear cases where vulnerable young people can be influenced by online content. I would guess the people who put this game online don't realize the possible consequences of their actions - it's extremely concerning."

But is it all that concerning, or is it just another stupid Flash game? If Billy Suicide has any impact whatsoever on an individual's decision to take his own life, then I'm thinking there was a lot more wrong with that individual than just Billy Suicide. On the other hand, maybe I'm an insensitive bastard. Decide for yourself (and try to keep Billy from eating his gun) here.