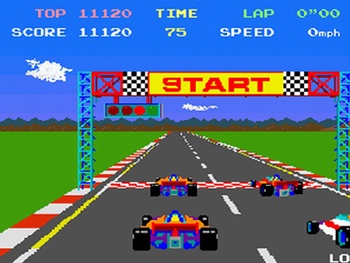 Authorities in Australia have taken to blaming a perceived increase in youthful indiscretion behind the wheel of automobiles on videogames. They claim more young drivers are driving drunk, speeding, and getting their licenses revoked, as a result of the supposed sense of invincibility they derive from racing shenanigans in the virtual world.

"Videogames can have a negative impact on young drivers, because it increases their complacency and their indulgence in risk-taking behavior," said New South Wales acting superintendent Dave Evans. "In games you race, you crash, and it is a matter of pressing the buttons and off you go again. In real life it doesn't work that way. You can be killed."

Ok, that's some asinine logic. *Clunk* *scrape* *clunk* - (soapbox being adjusted for proper stability) - pardon me, but isn't part of the allure of playing driving games the fact you can run over people, drive full-speed into oncoming traffic, go careening off of cliffs or buildings, and generally behave like a sociopathic lunatic without hurting yourself or other people in the process? Few sane people are going to engage in such activities, provided they are indeed of sound mind, if the result is almost guaranteed to be their early demise.

To suggest the average Australian kid doesn't know the difference between crashing in a game and coming magically back to life at a button press and crashing in real-life and having to be extricated from the twisted wreck of crushed metal and raced to the hospital is outrageous. Perhaps some kids' inability to drive properly comes from a lack of proper education. Other officials cited in the report pointed to the lack of a formal driving program in some schools and a general need for parents to be stricter on their student drivers as the culprit.