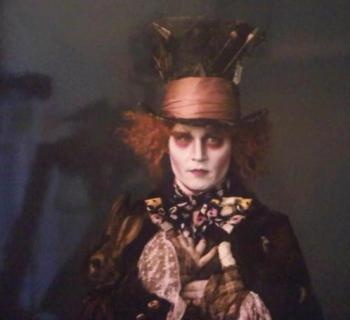 The first image of Johnny Depp as the Mad Hatter has been released, and there's no denying it - he's got the "mad" thing down solid.

Depp is appearing in Tim Burton's adaptation of the Lewis Carroll classic alongside Mia Wasikowska, Anne Hathaway, Helena Bonham Carter, Alan Rickman and Christopher Lee. Not much is known about the film at this point, but the shot of Depp's character looks very much like what you'd expect from a Tim Burton version of Alice in Wonderland.

Depp has a reputation for choosing unusual roles in movies like Cry Baby, Benny & Joon, What's Eating Gilbert Grape and From Hell, but these days he's probably best known for playing the droopy-eyed, Keith Richards-like pirate Captain Jack Sparrow in the Pirates of the Caribbean movies. He also has a long history of collaboration with Burton going back to 1990 with Edward Scissorhands; since then, the pair has teamed up for movies like Ed Wood, Sleepy Hollow and in 2005, another children's novel adaptation, Charlie and the Chocolate Factory.

Alice in Wonderland is currently in production, and is planned for release in March 2010.