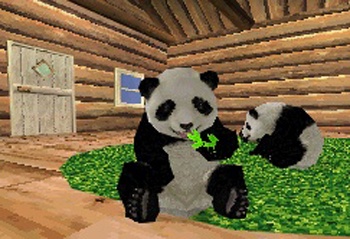 Why risk life and limb to explore nature, when you can enjoy it from the comfort of your own gaming device?

"Our content is extremely well-suited for a global gaming audience," said National Geographic's Paul Levine, who will head up NGG. The gaming division is working with various established publishers to create games for different platforms. Levine said the games to be produced will primarily be for entertainment value, but they'll also provide substance for players and contain an educational component. The games will feature a wide swath of themes culled from National Graphic.

NGG's first title, Herod's Lost Tomb, is already available for PC and the iPhone. The game is based on a National Geographic TV show on the life of King Herod and a story featured in the magazine's December issue. This month, Namco Bandai just launched National Geographic: Panda for the Nintendo DS. The game features adorable panda raising activities, and it appears to be a cross between Nintendogs and Zoo Tycoon. Next month, Sony will be launching National Geographic: Africa as well. Other National Geographic titles, including Rain Forests and Greencity, are slated for 2009.