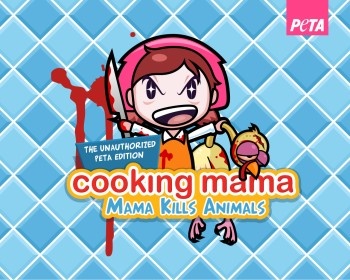 Cooking Mama has responded to a Flash game by PETA that portrayed her as a murderous, blood-thirsty bitch, and to my surprise it looks like she's taking the high road.

PETA's game, called Cooking Mama: Mama Kills Animals, was unveiled earlier in the week, treating gamers to the spectacle of a knife-wielding Cooking Mama who insisted that we beat the crap out of our turkeys before preparing them for the Thanksgiving chow-down. And just because the turkey is dead doesn't mean we should ease up on the bird; Mama, it seems, likes it rough.

Many observers felt that PETA's use of Cooking Mama's likeness and other Majesco materials would leave it open to a big fat lawsuit, but based on a statement issued today by Cooking Mama and Majesco, it doesn't sound like that's going to happen.

"Food lover and culinary cutie Cooking Mama is a virtual chef who believes that good home cooked food, properly prepared from the best ingredients, can bring people together around the table and make the world a happier place," the statement said. "That's why Mama is taking a stand with oven mitts raised high against the latest PETA objection targeting her freshly released videogame, Cooking Mama World Kitchen, that shipped this week for Wii from Majesco Entertainment Company. Mama wants people to know that World Kitchen includes 51 recipes from around the world, ranging from vegetarian fare like miso soup and rice cakes to international delicacies like ginger pork and octopus dumplings."

Mama herself also spoke up on the matter, pointing out that her latest game includes over 25 vegetarian-friendly recipes. "I would never put rat in my Ratatouille," she said. "Like any accomplished cook, I create my recipes to appeal to a broad range of tastes and preferences. My only goal is to ensure you leave the table well fed." Mama added that she "fully supports the humane treatment of animals."

This is a brilliantly measured response from Majesco, which has managed to simultaneously address the issue, blow off PETA and squeeze out a little more free publicity for Cooking Mama World Kitchen, all while refusing to confer a single drop of legitimacy to what is at its heart a very stupid complaint. Well played, Majesco.