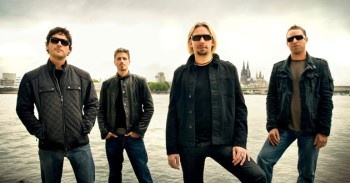 Nickelback frontman Chad Kroeger wants all you kids out there to quit wasting time playing Guitar Hero and learn how to play a real instrument instead.

In an MTV interview leading up to the release of the band's latest CD, Dark Horse, Kroeger expressed concern over the shrinking number of bands in the rock and roll business. "I feel like there's not enough rock bands out there, especially when we go on the road," he said. "It's tough to find other bands out there, because either they're making a record, or they just got done touring."

The solution, in Kroeger's eyes, is to encourage people to spend less time pretending to be musicians and more time actually becoming one. "Kids: Start rock bands," he continued. "Set down the Guitar Hero, learn how to play an actual guitar and start a band, because it's hard to find more bands to put a solid rock-and-roll package together, to get out there."

He's doubtlessly overstating things a bit, but I think Kroeger may be on to something. It's hard to imagine that the massive popularity of games like Guitar Hero and Rock Band isn't drawing the attention of people who would otherwise be inclined to pick up a real guitar, and as much as we might like to pretend otherwise, being a top-ranked Guitar Hero player has about as much to do with being a rock star as skill in Colin McRae Dirt has to do with making you a ranked WRC driver. On the other hand, it could easily be argued that Guitar Hero exposes a new generation of fans to music they might otherwise miss out on, very possibly inspiring them to genuine musical accomplishment. It really comes down to a question of what the game is supplanting: Listening to music, or playing it.