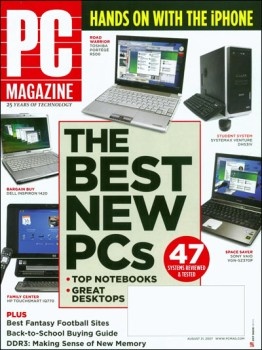 It's the end of an era: Ziff Davis Media has announced that it is shutting down the print edition of its flagship publication PC Magazine.

PC Magazine already brings in most of its profit via the internet, according to a New York Times report, earning 70 percent of its revenue and 80 percent of its profits through the digital side of the business. Furthermore, all of the writers and editors on the magazine are already included in the digital budget and have been for the past two years, said Ziff Davis CEO Jason Young. "The viability for us to continue to publish in print just isn't there anymore," he added.

Young said the magazine would be profitable in 2008, but that a loss had been forecast for 2009 based on fewer advertisements, rising costs and dwindling circulation. PC Magazine's rate base this year - the circulation number guaranteed to advertisers - was 600,000 issues, just half its late 90s peak of 1.2 million issues. Fortunately, the majority of people who work on the magazine will be retained by Ziff Davis; only seven jobs out of 140, in production, circulation and advertising, will be cut.

The transition to an exclusively digital format will be eased somewhat by the emphasis the company had already placed on its online business. Lance Ulanoff, editor of the newly-renamed PCMag Digital Network, said that even before the decision to eliminate PC Magazine, the focus had been on getting content to the website first. "All content goes online first, and print has been cherry-picking for some time what it wants for the print edition," he said.

Young also revealed that Ziff Davis was considering moving Electronic Gaming Monthly to an online-only format, but that a final decision regarding the fate of that magazine would not be made until the end of the year.

It's no secret that Ziff Davis has been having a rough time of it lately; the publisher filed for chapter 11 bankruptcy earlier this year, and in October, former Games For Windows Magazine Editor-In-Chief Jeff Green said print media was in trouble right across the board. "How do you come out every four weeks with a magazine you made six weeks earlier and still be relevant?" he asked.

Nonetheless, the shuttering of PC Magazine is a shock. The magazine launched all the way back in 1982 as simply PC, featuring previews and reviews of both hardware and software, columns by respected industry experts, Q&A segments and more. For many early PC enthusiasts, myself included, PC Magazine was a monthly staple, a window into the evolution of the computer world in the days before the real-time immediacy of the internet. I haven't purchased an issue of PC Magazine in years - my own little complicity in the downfall of print - but I still feel a vague sadness over the passing of a once-great publication. PC Magazine will end its storied print run with the January 2009 issue.