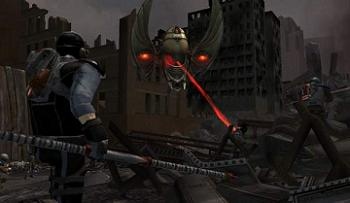 Hot on the heels of Richard Garriot's departure from the Tabula Rasa team comes as news that shouldn't surprise anybody: the sci-fi MMO will be shutting its doors at the end of February 2009.

The remaining members of the Tabula Rasa team have formally announced that come February 28, 2009, NC Soft will be ending service for the struggling MMO.

"Last November we launched what we hoped would be a ground breaking sci-fi MMO," the announcement reads. "In many ways, we think we've achieved that goal. [...] Unfortunately, the fact is that the game hasn't performed as expected. The development team has worked hard to improve the game since launch, but the game never achieved the player population we hoped for."

While current Tabula Rasa players will be offered incentives for their dedication by way of free gameplay time with other NC Soft MMOs (including beta access to their upcoming title, Aion), the development team won't be so lucky. Kotaku is reporting that along with closing of Tabula Rasa will come the loss of jobs as NC Soft plans to lay off an undetermined amount of employees as the project scales down.

On the subject of lay offs, spokesperson David Swofford told Kotaku, "We currently don't know how many people will be affected by that."

The end of Tabula Rasa has long since been expected, despite the noble efforts of its development staff over the past year. It was originally announced in 2001, which considering the current state of the MMOG genre, seems like eons ago, when games like Everquest, Ultima Online and Asheron's Call dominated the scene, although the concept of a sci-fi MMOG is still as fresh today as it was back then. Come launch day, one that even Garriott himself admitted was "rough," not even sending virtual cover girl Sarah Morrison to the naked halls of Playboy was enough to generate interest in the title.

A View from the Road: How I Learned to Stop Worrying and Love the Microtransaction John Funk 34 Comments