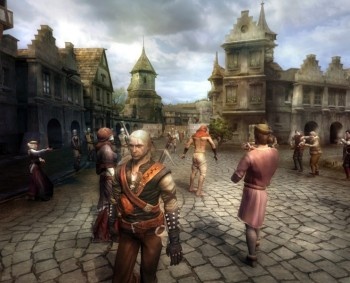 Geoffrey Zatkin, president of research company Electronic Entertainment Design and Research, claims that only four percent of all videogames that are released for sale actually make a profit.

Zatkin made the statement in a recent interview with Forbes, discussing how EEDAR uses "historical and competitive data sets" to project game sales as well as how publishers can employ various aspects of design, marketing and release strategies to maximize a game's profit. Since being founded in 2006, EEDAR has provided a wide range of game design metrics and other information to major publishers including Electronic Arts, Activision and Ubisoft.

"Every game I have ever worked on, we've gone in blind as to which features would sell the game better," Zatkin said, adding that the idea of sinking an extra $500,000 into a game to include features like multiplayer that may or may not increase a game's profitability "would scare the crap out of me." The reason, apparently, is the gross imbalance between the amount of money spent on finalizing a game's design and the amount of games that actually earn that money back: According to the article, 60 percent of a game's budget is spent on "reworking or redesigning" it, yet only four percent of games that get a retail release actually earn a profit.

Four percent? Seriously? I'm no expert and I'm certainly not looking to start an argument with someone who is, but there's no way that can be right; it's either a typo, a gross miscommunication between Zatkin and the interviewer or EEDAR is the worst research and analysis firm on the face of the Earth. Anyone in any business, videogames or otherwise, would have to be absolutely out of their mind to invest in a project with only a four percent chance of earning a profit. That's like playing Russian roulette with a fully-loaded revolver and hoping one of the rounds is a dud.

The rest of the interview is interesting, if a bit depressing; Zatkin appears to believe that videogame profits can be maximized by way of homogenized, analyst-based design in which every aspect of a game's creation can be broken down and examined based primarily on how it will most likely affect a title's sales and profit potential. It's sad, but he may be right: EA Sports doesn't keep tapping the Madden NFL keg for its vast expanse of unexplored artistic potential. But the idea that only four percent of released games earn a profit is a tough one to swallow.

Are game publishers really that crazy? Or is there some other factor at work that we're just not seeing?

UPDATE: EEDAR has contacted us with a clarification of the Forbes interview with Zatkin, and as predicted, the "four percent" figure is the result of a misquote.

The confusion results from the fact that while the number quoted referred to games that reach store shelves, the figure given by Zatkin was actually based on games that just enter production. "Only 20% of games that begin production will ever finish," the statement said. "Of those 20 percent that are finished and released to the market, only 20 percent of them will ever realize a significant profit (Source: Secrets of the Game Business Francois Dominic Laramee). That equals four percent of games that start production return a significant profit."

Of course, you might wonder what "significant profit" is. We did too. So we asked.

An EEDAR representative said that as the use of the term implies, there's no hard-and-fast number for what represents a "significant" return on a game. If Halo 3, as an example, earned a million dollars in profit it would likely be considered a dismal failure; for a small casual gaming startup, on the other hand, it would be a major success. Like every other aspect of game design examined by EEDAR, what constitutes an acceptable profit is determined on a case-by-case basis based on numerous factors.

So while you may or may not be a fan of "game design by analytical committee," at this it makes a little more sense this way.

GDC 2014: 89% of All MOBA Players are Playing League of Legends Encaen 30 Comments
Comments on