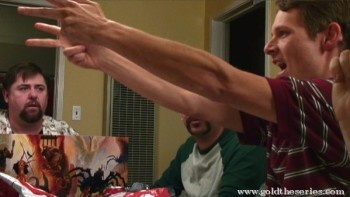 A new web-based video series telling the tale of a professional table-top RPG team has debuted, and it's funny because it's oh-so-painfully true.

Based around six old-school PnP gamers (although one is apparently just the equipment manager), Gold will follow the exploits of a American Goblins and Gold team as they prepare to compete in the World G&G Championship and take on their arch-nemesis, the British team. The premiere is actually a prologue, set two years ago at the team captain's appropriately geeky bachelor party: An all-night G&G session. But is his bride-to-be really as indulgent of his world-beating aspirations as he lets on?

The dialog, production values and acting are all top-notch, and it's no surprise that most of the actors in the series have considerable real-life gaming experience to draw upon. "Almost all of us are big comic book and sci-fi geeks as well," series creator David Nett, who plays team captain Jonathan Drake, said in a recent interview. "Gaming runs through the blood of our cast and production staff." The truth of that statement is borne out by the fact that if you have any sort of tabletop gaming experience at all, you'll see yourself - and your fellow gamers - reflected in one of these characters. As much as I hate to admit it, I'm Tim: Hesitant about the rules and prone to bad judgment.

To learn more about Gold, "The web series that does double damage," check out goldtheseries.com. New episodes will be posted monthly.