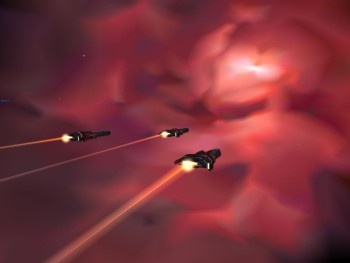 Fans of the space opera RTS Homeworld will be pleased to hear that franchise creator Relic Entertainment is "definitely looking" at making Homeworld 3.

Speculation about a new Relic-developed addition to the series began in earnest when THQ, which bought Relic in 2004, acquired the franchise from original publisher Vivendi in late 2007. "We're really happy the IP has made its way home, and yeah, we're definitely looking at it," Relic's Jonny Ebbert, lead designer on Dawn of War II, told Eurogamer. "We'll see what happens in the future."

"There's always that chance" that Relic could do a new Homeworld title, he said, letting slip that the studio was "very, very" excited to show it off to the world - a strong implication that work has actually already begun.

But Chris Degnan, designer on the Company of Heroes expansion Tales of Valor, was less forthcoming when hit with a similar sneaky approach. Asked how things were coming along, he replied, "As it always has - behind closed doors. Blacked off. Homeworld 3, obviously, I'm not at liberty to tell you anything about. So, good try!"

The original Homeworld was a major success, with stunning graphics, a magnificently atmospheric soundtrack, an engrossing story and, of course, solid RTS gameplay. The game was given Game of the Year nods by IGN and PC Gamer as well as a Game Critics Award at the 1999 E3, and spawned Homeworld: Cataclysm, a standalone expansion by Barking Dog Studios that was released in 2000, and a full sequel, Homeworld 2, which came out in 2003.

Whether or not Relic is currently at work on a new Homeworld, it's obvious the team has a lot of affection for the game. "Homeworld's always been dear to our heart," Ebbert said. "It's what put us on the map, it was our first product, and I think it will always have a special place in our hearts."