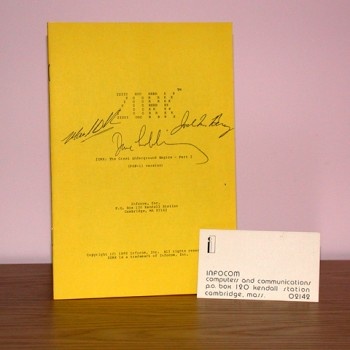 Oh, if only I had a real job, then maybe I'd be able to buy things like the owner's manual for an original version of Zork that recently went up for auction on eBay.

Bear in mind that this isn't "original" as in a first print for the TRS-80 or Apple II; this is a manual for an original Zork, developed and released for the PDP-10 and PDP-11 mainframe computers. This particular version is for the PDP-11, a 16-bit DEC mainframe that was designed and built in the early 70s. According to gameSniped, less than 100 copies of the game were sold, making it an extremely rare find.

The manual has been autographed by three of the game's authors, Mark Blank, Dave Lebling and Joel Berez, and includes an Infocom business card from that era; the original 8" floppy disc, sadly, is not included. Still, the historical significance of just the manual and business card are considerable; the sale of old games on eBay and specialty game auction sites is big business, and as these titles get older, they just get more valuable.

This isn't some kind of nerd fad, either. Videogame preservation efforts in both the U.S. and the U.K. recognize the cultural contribution of electronic gaming and are striving to preserve both digital and physical media associated with early games, while amateur efforts like the Origin Museum attempt to do the same thing, typically on a smaller and more specialized scale. A small but deeply-engaged community of private collectors also helps ensure that historically significant videogame material isn't lost to the ravages of time - and that prices for the best of it remain high.

On that note, there are two things you should be aware of before you charge over to eBay to place your bid: One, the auction is over, and two, you never had a chance: The final sale price was $2,348. But you can still see the completed auction, and get a glimpse at one of the most unique pieces of game memorabilia to ever hit the market, at eBay.com.