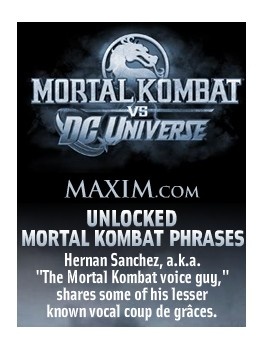 Maxim recently had a chance to sit down for awhile with famed Mortal Kombat narrator Hernan (or is it Herman?) Sanchez, and naturally they did what any of us would do: Recorded him saying stupid things.

Not stupid things like confessing to murder or revealing a plot to overthrow the Turks and Caicos, though; Sanchez was persuaded to turn his otherworldly voice from the blood-dripping narrations of Mortal Kombat to more nerd-friendly phrases, like "Epic Fail!" or "Tickle Him!" Sanchez did a total of eight goofy phrases, and Maxim was good enough to provide an embeddable Flash control which is sure to provide untold minutes of amusement.

Sanchez first appeared in the Mortal Kombat series over a decade ago, in the 1997 PlayStation/N64 release Mortal Kombat Mythologies: Sub-Zero. Since then, he's worked on just about every Mortal Kombat title released along with Unreal Championship 2: the Liandri Conflict and Blitz: The League, yet while he's best known for his thunderous voice, he also boasts numerous credits as a character designer, modeler and animator. There is one point of confusion, however: Is this guy's name Hernan or Herman? Maxim cites him as Hernan, but numerous other online sources refer to him as Herman.

In either case, if the idea of hearing the Mortal Kombat voice guy say "Are you going to finish that?" seems funny to you, you'll find laughs galore at Maxim.com.