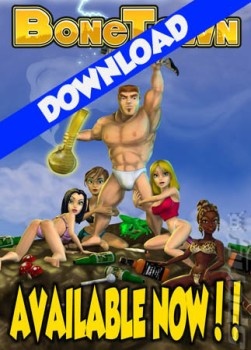 The maker of a new adult videogame called BoneTown says it is creating a "new industry" after criticizing the ESRB for failing to allow the marketing and sale of adult-themed games through regular retail channels.

"It doesn't make sense," said the CEO of BoneTown developer D-Dub, who refers to himself as Hod. "The ratings boards are not telling us that these games aren't for kids. We know that already. What they're telling us is that adult games shouldn't exist at all. We don't agree, and neither does our customer base of adults who are interested in games that might include themes like sex, drugs, and language."

"Since they've made it so that games like ours can't be marketed and distributed through the channels other video games use, we are starting a new industry to get this game out to our customers," he continued. That "new industry," according to the company website, is a merging of "the two most popular industries in the world," taken to the internet, where regulation is less intense.

The second question is more relevant to the industry as a whole: If BoneTown does manage to do more than simply vanish in a puff of nerd trivia, how likely is it to result in renewed efforts to rate and/or legislate videogames that are distributed exclusively online? It's unlikely, given the safeguards already built into the internet - can't buy this stuff without a credit card - and the fact that the distribution of pornography is already regulated to the satisfaction of the U.S. government, but a successful melding of videogames and porn is bound to get at least a few knickers in a twist.

Interestingly, while Spong claims the game has been given an Adult Only rating by the ESRB, the ESRB database has no listing for it. Not that it matters much, from a practical perspective: It may not have an AO rating but it very obviously would if D-Dub actually applied for a rating, so you'd never see this thing on a console or a Wal-Mart shelf anyway. Thus, BoneTown is available exclusively for the PC in digital format and, for those who prefer something tangible for their money and are willing to pay an extra ten bucks for it, a boxed release. To learn more about the game, check out BoneTown.com - adults only, please.