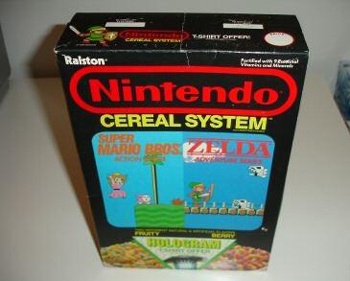 Does digging into unusual edible gaming goodies temp your taste buds or turn your stomach? You decide.

Many avid videogame enthusiasts have their own ritual crap - I mean "snacks" - they enjoy when locked in marathon sessions behind the controller, but the emergence of food branded with videogame themes and imagery still remains a curiosity. The intrepid folks over at Asylum have compiled an intriguing collection of the "worst gaming foods" culled from the annals of gaming history's past and present that's guaranteed to make even the most stalwart gastronomists cringe.

Unsurprisingly, the bulk of the entries cited fall into the 1980s breakfast cereal category. Some of the earliest forerunners to modern day gaming snacks were best enjoyed drenched in milk first thing in the morning. From the Atari age, Donkey Kong, Q-Bert, and Pac-Man all received the kids cereal treatment, but the best was the ultra cool Nintendo Cereal System that sported both Zelda and Mario-themed crunchy goodness. This was one trend that should absolutely be brought back. I'd love to start my day with a nice bowl of BioShock puffs, Resident Evil crispies or Animal Crossing flakes.

With modern times comes quintuple the calories, which is why KFC's box of death is being marketed to counteract the energy burning potential of Guitar Hero World Tour. For slightly less artery-clogging action, I'm partial to the Pikachu Mac-N-Cheese.

The list gets a little sketchier, when venturing into the uncertain realm of gaming beverages. I can't imagine the hyperactive twitchiness induced by theHalo 3-themed Mountain Dew "Game Fuel" is going to do much to help your game. The Resident Evil "T-Virus Antidote" is suspect simply because any drink associated with zombies gives me great pause. Also, the eerily vague "Final Fantasy Potion" is another elixir that's best untouched. I think I'll stick with my Colt 45; it work's every time. Just ask Lando Calrissian.