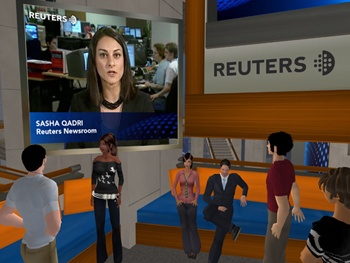 After two years of virtual reporting in Second Life's digital realm, the Reuters news organization has again returned its focus to the real world.

London-based news service Reuters recently shut down its virtual news bureau in the popular online world of Second Life, citing a lack of buzz and excitement in the game's business environment. Though Reuters will still report on some of the happenings in the online realm, it will do so only within the confines of its normal technology and media coverage, said a spokesperson.

In 2006, Reuters opened its Second Life bureau with reporter Adam Pasick as the chief. Former Reuters Second Life reporter Eric Krangel said the virtual world is still thriving, but it's creating less of a buzz and having a tougher time drawing in more general audiences.

"The very things that most appeal to Second Life's hardcore enthusiasts are either boring or creepy for most people: spending hundreds of hours of effort to make insignificant amounts of money selling virtual clothes, experimenting with changing your gender or species, getting into random conversations with strangers from around the world, or having pseudo-anonymous sex," said Krangel, adding his actual news beat was far less glamorous.

Krangel argues Second Life can be a blast from a players' perspective, but it's not a great tool for business applications. Frankly, I'm surprised Reuters even bothered to open that door in the first place.

A Folk Hero for the Online Age tendo82 34 Comments