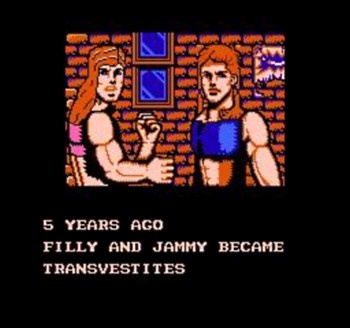 There are places on the internet where people gather to modify their old videogames with tenderness and affection, improving and upgrading them while remaining true to the vision and quality of the original release. And then there's Bad Hacks.net.

Bad Hacks is a place where the worst of the worst of ROM hacks gather to smoke cigarettes, get into fights and leer at easy girls. "This site solely caters for crass mutilations that nobody else wants to deal with," the site's main page proclaims. "Expect foul language, warped logic, and crude 8-bit nudity. Prepare to journey into worlds crafted by the mentally disturbed and chronically lazy. You have been warned."

ROMs are files which contain data taken from the Read Only Memory modules in old videogame cartridges, which can be played on PCs through software known as emulators that simulate systems ranging from the Atari 2600 to the SNES and everything in between. ROM hacks are simply those same files that have been modified in some way, be it through the addition of entirely new graphics and levels or simply a changed name and a new color palette. Most sites focus on the best mods; Bad Hacks is all about the worst.

"There are sites out there that provide commercial ROMS and there are community sites that encourage the development of quality ROM hacks, e.g., translations, difficulty hacks," the site FAQ says. "Mutant hacks like the ones featured here are generally looked down upon & often excluded. We aim to provide a home for this type of hack. Why? Because some of them are incredible. They're maybe not 'good' in a conventional sense, but they often contain stuff that will blow your mind, or at least make you worry about the future of humanity."

How bad can it really be? A few examples:

Blac-Man: Steal money while eluding the KKK & powering up with guns. Profoundly racist.

Homocop: Robocop comes out of the closet and fights some crime, maybe.

Keep in mind that these are the hacks I'm allowed to describe; it gets a whole lot worse but you're going to have to look for yourself if you want to go further. Most of the hacks are fairly primitive, featuring poorly-drawn penises, highly-pixelated female nudity and heaping helpings of bad language, but there are a few that look like they might be worth playing. If nothing else, Bad Hacks.net offers an interesting and thorough look at a uniquely odd side of retro gaming.