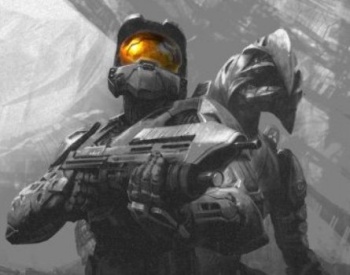 Collectors can now get their Halo music fix in one huge payload filled with extra goodies.

Though CDs packed with music from the Halo series have been available individually for some time, Sumthing Else Music Works - purveyors of gaming and non-gaming albums alike - are now offering a massive, five-disc box set compiling the epic soundtracks from all three Halo games. Bonus content from the upcoming Halo Wars real-time strategy title on Xbox 360 is even thrown in to sweeten the pot.

The series' award-winning musical scores, composed by Bungie audio director Martin O'Donnell and composer Michael Salvatori, let you unwind to the refreshing (and occasionally rocking) tunes while you daydream of capping Covenant scum during the morning commute. The set includes a bonus DVD featuring four preview tracks of the upcoming soundtrack for Halo Wars, a behind-the-scenes look at the recording sessions, and the "Five Long Years" opening cinematic for the forthcoming game. Halo Trilogy - The Complete Original Soundtracks goes on sale today for $29.98.