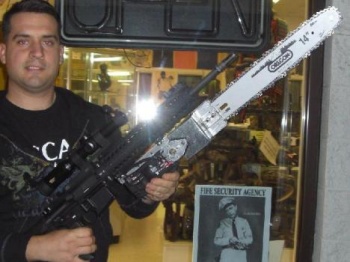 A big guy with a big gun and a little chainsaw makes eviscerating magic, by channeling the spirit of the Gears of War Lancer.

Some people like their guns, and some people like their guns with chainsaws attached. A fellow over at the AR15.com forums has created what can only be described as an actual working - and subsequently deadly - Lancer like the one wielded by Gears of War's muscle-bound protagonist Marcus Fenix. However, it's basically an AR-15 assault rifle with a "firearm mounted anti-zombie device." That's a nice way of saying it can definitely shoot and then chop you into bits.

While the weapon itself seems impressively constructed, the videos the guy posted of himself on YouTube with the thing in action are hilariously amusing and a touch disturbing. You can watch him violently sever (tree) limbs in gruesome sprays (of sawdust), weakly attempt to saw a door down, and cut straight into a giant tree. Hands-down the best one features him charging at an outcropping of poor, defenseless pumpkins with guns blazing. After shooting the crap out of them, he dices them up with the saw blade. It's nowhere nearly as cool as chainsaw battles against the Locust horde, but the guy gets props for effort.