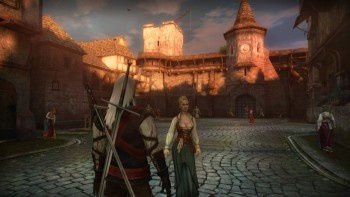 CD Projekt RED and Atari have announced The Witcher: Rise of the White Wolf, a "completely rebuilt" version of the award-winning PC RPG for the PlayStation 3 and Xbox 360.

The console release of The Witcher will be based on the story told in the hit 2007 PC game, but will feature a new engine for "matchless, state-of-the-art" visuals as well as an all-new combat system that will deliver "thrilling dynamic action." The game is being developed by a core CD Projekt RED team in conjunction with French developer Widescreen Games, the studio behind games like Fame Academy: Dance Edition and Dead to Rights 2.

"We're thrilled to continue our great relationship with Atari, whose refreshing focus on quality fits squarely with our own, to bring Geralt and The Witcher franchise to an even larger audience - fans who expressed to us very clearly that The Witcher would be a natural fit on consoles," said CD Projekt RED CEO Adam Kicinski. "Console gamers' tastes are maturing; they're looking for deeper story-driven experiences that are very hard to find in today's console market. We're developing this remake based upon the compelling narrative that helped The Witcher on PC sell more than a million copies and win more than 100 awards, building everything else from the ground up to be the definitive console RPG."

In a message posted on the The Witcher community website, CD Projekt co-founder Michal Kicinski moved to reassure both console and PC gamers that Rise of the White Wolf was not a sign that the studio was compromising either its commitment to quality or its roots as a PC developer. "We're not about to dumb down our games for anyone. We want to give players the best games, regardless of platform," he said. "It's important to us that each game plays to the platform's strengths while treating our players with respect. That was our development philosophy with The Witcher and it's our philosophy on all three of the games in development at CD Projekt RED, including Rise of the White Wolf. Anyone concerned that we're going to somehow offer a shallow RPG or abandon the PC platform simply because we're working on consoles can stop worrying."

The Witcher: Rise of the White Wolf is currently slated for release in fall 2009, and even fans familiar with the PC release might want to keep their eyes on it. "The only thing we're taking directly from The Witcher is the story," Adam Kicinski said. "Everything else is being created from scratch or significantly reworked to get us to our end goal of delivering the ultimate console RPG."