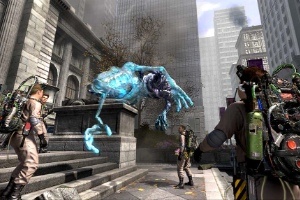 In which we attempt to preview Ghostbusters across three different platforms without quoting a line from Ray Parker Jr.

Upon arriving in a cozy, hotel room suite, we were presented with three tools in which to combat spectral malfeasance: stylus, remote and controller. Proceeding the fallout of Vivendi from the mother ship Activision-Blizzard, Atari has become the lucky publisher to host Dan Aykroyd's dream come true, Ghostbusters: the videogame. Releasing in June 2009 (and just in time for the 20th anniversary of the original film), Ghostbusters will be arriving on the Nintendo DS, Wii, Xbox 360 and PlayStation 3. All three of which share the same content so regardless of which version you settle with, rest assured, you'll hear Ray Parker Jr's original theme song, which is not to be confused with Mistah Fab or DJ Yoshitaka of Beatmania fame. Heck, on the Nintendo DS there's even a button dedicated to playing it during driving sequences, as if you'd ever roll without it.

Our time with the three versions of Ghostbusters was regulated to the library chapter of the game, which gave us the perfect setting for comparing the similar content. While everything from the scenarios and script are the same across all platforms, the ways in which they're conveyed are quite different. More so the Nintendo DS rendition of Ghostbusters, as unlike its console siblings, it swaps the 3-D action for a top-down viewpoint, and a gameplay mechanic quite similar to the PC classic, Cannon Fodder, which is to say there's a lot more shooting to be had. The handheld version also places a heavier emphasis on squad mechanics as most of your time will be spent controlling the ghost catching trio of Ray Stantz (Dan Aykroyd), Egon Spengler (Harol Ramis) and Peter Venkman (Bill Murray), as you hunt for new parts to upgrade your equipment.

Stepping up to the Nintendo Wii brings us closer to the fully realized vision of a "Ghostbusters III" in videogame form, albeit, with condensed graphics. Traversing through the library in both the Wii and Xbox 360 versions of the game is largely the same, including the running dialogue (voiced by the original actors), though definitely a bit sillier looking due to the Wii's cartoon-styled visuals. Catching ghosts is quite similar regardless of which version you take on, with a wrangling mechanic that plays almost like a simplified fishing title, with lots of pulling and pushing around of the ghosts until they're locked tight into the trapper. While I'm not particularly fond of the typical Wii motion controls, I have to admit, tossing the nunchuk under-handed to throw out the trap does tend to invoke a case of the nerd giggles.

Ghostbusters truly shines on the Xbox 360 and PlayStation 3 platforms, however, with the expanded visuals bringing the world to life. The journey through the library, which we had already done twice over, felt like a whole new experience with dozens of books flying off the shelves, pages littering the air and ceilings near collapsing in our attempts to reign in the ghosts. The most impressive feature on the Xbox and PlayStation versions of Ghostbusters is the proton pack itself, which encases the entire interface into one fancy package, freeing the screen of menu clutter and packing an additional piece of eye candy to boot.

Overall, Ghostbusters is looking to present an extremely accurate depiction of what you see in the films, much to the chagrin of a few of my fellow critics, to which I must ask, what does one expect from a Ghostbusters videogame? Your team wanders about a spooky setting, utilizing various gadgets to hunt your prey, Aykroyd, Ramis and Murray fill the gaps with an endless string of witty banter, and then you fire lasers at ghosts until you can shove them in a tiny contraption, much like the films. It was never about over-the-top, non-stop action, but about a bunch of slick-tongued, middle-aged men with backpacks who fight specters and make with the laughs. This isn't for the Gears of War or Ninja Gaiden or whatever fans, it's for those who have waited twenty years to see their favorite characters once more and for them this will be love all over again.

Ghostbusters - It Has Women in It! Marter 71 Comments