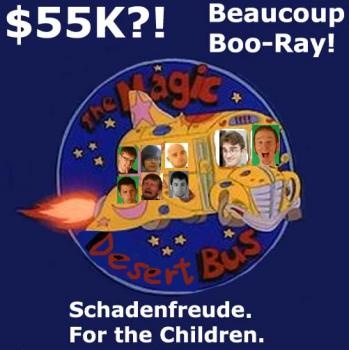 The Desert Bus For Hope is about to pull into the station, but if you find amusement in the spectacle of four horribly bored Canadians playing the most tedious game in the universe to help support the Child's Play charity, you can pony up a few bucks to help keep them on the road awhile longer.

Some background on Desert Bus, taken from Wikipedia:

"The objective of the game is to drive a bus from Tucson, Arizona to Las Vegas, Nevada in real time at a maximum speed of 45mph, a feat that would take the player 8 hours of continuous play to complete, as the game cannot be paused. The bus contains no passengers, and there is no scenery or other cars on the road. The bus veers to the right slightly; as a result, it is impossible to tape down a button to go do something else and have the game end properly. If the bus veers off the road it will stall and be towed back to Tucson, also in real time. If the player makes it to Las Vegas, they will score exactly one point. The player then gets the option to make the return trip to Tucson-for another point (a decision they must make in a few seconds or the game ends). Players may continue to make trips and score points as long as their endurance holds out. Some players who have completed the trip have also noted that, although the scenery never changes, a bug splats on the windscreen about five hours through the first trip, and on the return trip the light does fade, with differences at dusk, and later a pitch black road where the player is guided only with headlights."

In Desert Bus For Hope, four intrepid lads take turns driving the bus in four hour shifts while soliciting donations to support the Penny Arcade Child's Play charity for children's hospitals. The rules are simple: They drive the bus, if they happen to run the bus off the road the game will be reset and restarted, and drivers cannot leave their post at any time. Webcams monitor the drivers in action, and for the terminally masochistic, the on-screen Desert Bus action.

Keeping the four on the road are donations; each hour, the donations required to keep them driving increases geometrically, increasing by seven percent each hour; currently they've raised over $55,000, but after 122 hours on the virtual road, the trip appears to be approaching the end. The total needed to keep them on the road for another hour: $3309.

Donations are being taken by the ChipIn system and go straight to Child's Play, a charity that provides videogame hardware and software to children's hospitals around the world. It's a great cause, and a chance to inflict a little abuse on four well-meaning, generous souls in the process. What's not to love? Watch the action and kick in a few bucks at desertbus.org.