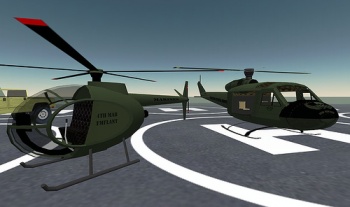 While the army says its meeting recruitment goals this year, that's not stopping the old red, white, and blue from trying every trick in the book (and then some) to find new blood. Its latest recruitment scheme includes setting up a virtual base in Second Life.

"Over the next 30 to 45 days you might, if you're one of them Second Life avatar dudes that likes to go populate islands within Second Life, you will find an Army island in Second Life," said Gen. William S. Wallace in a recent presentation at the 26th Army Science Conference. Wallace, commander of the U.S. Army Training and Doctrine Command, noted there will be two army installations in the virtual realm. One island will serve as a welcome center to provide recruitment contact information, and the other will hold activities like parachuting, weapon usage, and rappelling down towers.

Performing well in the virtual military activities will earn recruits points that can be used to buy virtual clothing like shirts and baseball caps, said Wallace. Tchotchkes will also be given out for recruits to wear. "There are about four million young people that routinely interface in Second Life," he said. "(That's) the age group of the young people who we're trying to encourage to join the military."

Beware what you ask for, U.S. Army. Second Life tends to attract users with peculiar tastes.