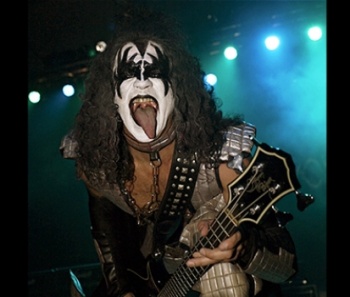 The legendary KISS bassist is slathering his lengthy tongue of approval all over a new collectors-edition Guitar Hero and Rock Band peripheral.

Serious KISS fans who want to rock and roll all night long and party every day with fake guitars and scrolling note runways should dig Simmons' over the top axe guitar peripheral. Modeled after his own ridiculous axe-shaped bass, the newly released Gene Simmons AXE guitar controller lets you live out (some of) your KISS-laden rock fantasies while living out your faux rock and roll fantasies. Even Simmons himself says his axe is hot stuff, though he's surely paid to say so.

"I never do anything half way. My axe controller is the closest thing you can have to being onstage in KISS. I created and designed the Gene Simmons AXE bass guitar and I can't wait for the fans to experience it for themselves," said Simmons in a press statement. "The Gene Simmons AXE guitar is such a recognizable symbol - people have been asking for a gaming replica ever since Guitar Hero was first introduced."

The axe peripheral - which sports Simmons' likeness and autograph - is three-quarters the size of the original it's based on. Smashing it against a living piece of wood may not produce the desired results, but it's bound to bring some outrageous fun to your living room rock arena. The special controller can be obtained for $79.99, and it's compatible with Rock Band and Guitar Hero for the PS2, PS3, and Wii. It also doubles as a sweet Halloween costume prop.