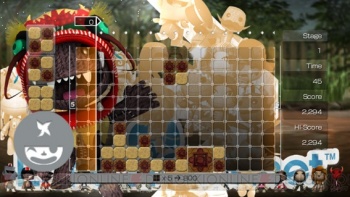 Q Entertainment's musical puzzler is coming to LittleBigPlanet in an official in-game version.

With LittleBigPlanet chock-full of user-created recreations of everything from Gradius to Mirror's Edge, the launch of an official in-game version of a title marks a first for Sony's platformer. The look of this version of Lumines will mirror the art style of LittleBigPlanet, with puzzle blocks having that sandstone-burlap look of some objects in LBP. Obviously, the game isn't built using LBP's creation tools (though that would be neat). No word on whether the music - a key component of the rhythm-based Lumines formula - will be pulled from LBP's funky and whimsical soundtrack.

Lumines has been released on nearly every other platform, from Xbox Live Arcade to the PS2. Lumines is due for release in LittleBigPlanet sometimes this winter, according to a Dengki Online report translated by Kotaku. Any potential pricing was not mentioned.