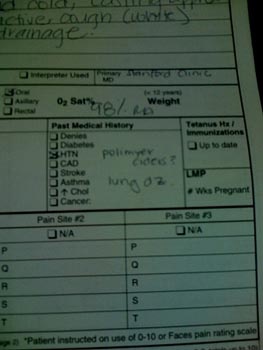 Whilst hackers and text addicts may think that speaking almost purely in abbreviations is something new, the medical professionals have been doing it for decades. Acronyms such as "AMF" have been appearing on Medical Charts for sometime now. (The rough translation being a not-so-polite Adios, My Friend.)

Now, the Thera company of Parque Científic, Barcelona, associated with the University of Barcelona, has developed a computer science application that interprets and automatically codifies the natural language written by doctors and other health professionals when they write reports.

Whilst records are being kept of these 'interesting diagnoses', some of the rapid acronym/scientific word analysis, like "pppppt", (This patient is only just alive) can prove useful to write in the heat of emergency, in a similar way that FPS acronyms developed.

The system is already in use in Barcelona, where it has a 95% chance of catching and deciphering acronyms used. It can also deal with multiple diagnoses, multiple languages and even correct typos.

"The objective when creating this system was to develop a tool that, besides improving the task of codification and information management, would also facilitate feedback to the medical team," Enric Castelló, director of Thera, explained.

There is little chance of it being taken away from the clinical world of notes though, as the sheer speed of delivery and mutation of language would be too much, so maybe the leet are safe...for now.

Gallery of the Day: The 7 Worst Doctors From Your Favorite Video Games DrStrangelove 3 Comments
Comments on