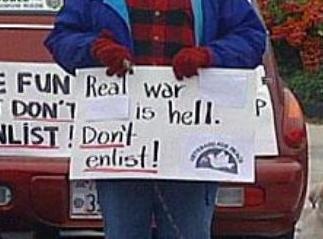 A group of peaceful-minded military veterans took to the streets in California over the weekend to protest the U.S. Army's use of a gaming tournament to draw in young recruits, likening the tactic to "military pedophilia."

Enlisting our country's youth, training them to kill, and then sending them off to war is nothing new for the U.S. government. However, a small gathering of military veterans, members of the Veterans for Peace organization, took issue with a U.S. Army-sponsored videogame tournament and staged a protest outside the event Saturday.

Designed to drum up interest for America's Army - a tactical first-person shooter developed by the army as a recruitment and PR tool - the competition was held at the army training center in Rancho Cordova and drew many teen participants.

"It's like giving candy to kids," protestor John C. Reiger, president of the Sacramento chapter of Veterans for Peace, told ABC News 10. "It's sort of like military pedophilia in a way, preying on our young people."

The America's Army tournament was open to participants ages 17 and up, though teens under 17 could take part in the event if accompanied by a parent or guardian. A military spokesperson defended the event as just another opportunity for "people" to "become familiar" with the Army. Doublespeak aside, it doesn't take too much reading between the lines to realize the military actually sees it as a prime opportunity for teens to be recruited.

Gallery of the Day: 8 Military Heroes From Our Favorite Videogames DrStrangelove 9 Comments
Comments on