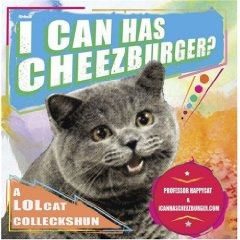 LOLcats have reached the general public

Well, it had to happen sooner or later: Icanhascheezburger has brought out its own particular brand of humor to the Christmas market.

The book, "I Can Haz Cheezburger?," which can be found at all good bookshops and e-tailers, features over more LOLcats from the sublime to the ridiculous. Any 'net savvy geek will instantly recognize some of the pictures, based around photographs of cats with a humorous idiosyncratic caption.

First created in the early 20th century, as detailed here, the LOLcats found new life in 4Chan around 2005.

Now they've reached the general public. Will you have it in your stocking?

Everyone Wants a Wii for Their Wedding krysalist 0 Comments